We report emission data on a regular basis to the relevant authorities, in our case to the DCMR. There are specific rules that describe how companies must measure and/or calculate emissions. This depends in part on the nature of the production process and the type of substance, assuming normal operating conditions. The measurements are done by independent specialized and certified companies with specific equipment, on behalf of Dow or the DCMR.

During an incident it may happen that extra emissions arise from a certain substance. In these cases, measurements are always taken to determine whether there is a risk of exposure to hazardous substances. In addition, the exact amount of emissions is calculated afterwards, taking into account circumstances such as the nature of the incident, its duration, substance properties and weather conditions. The DCMR, often together with Safety Region Zeeland, will check the calculation and the (detailed) supporting explanation.

Emission reduction
To reduce CO2 emissions Dow has focused primarily on improving the energy efficiency of processes. However, the impact of these measures on the total emissions of the Terneuzen site is limited and within the range of fluctuations caused by variations in production levels.

Towards Climate Neutral
Dow initiated a study of the potential for significant CO2 reductions at the site. This has resulted in a multi-generational plan to make the site climate neutral towards 2050. In the first phase, part of the off-gas (including a mix of methane and hydrogen) produced as a by-product in the crackers will be converted into circular hydrogen and CO2. The hydrogen will then be used as a low-emission fuel instead of the methane and the CO2 will be captured and stored. At a later stage the gas turbines of the crackers will be electrified and there is the possibility to capture and store the CO2 from the EO plant. This plan should lead to a reduction of 1.4 million tons of CO2 starting in 2026, rising to 1.7 million tons in 2030, which is over 40% of current CO2 emissions.

The plan fits well into Dow's long-term vision whereby after 2030 the furnaces of the crackers will be electrified. Since no fuel will then be needed for the crackers, the hydrogen can be used elsewhere, for example in the combined heat and power plant to produce low-CO2 electricity and steam or for the production of synthetic naphtha or other chemicals.

In order to be climate neutral by 2050, it is important not only to address our own stack emissions, but also to make our raw materials more sustainable (scope 3 emissions). This can be done by using alternative carbon sources, such as bio naphtha, pyrolysis oil made from plastic waste or synthetic naphtha. Since 2019, Dow has also been supplying a modest hydrogen stream derived from the crackers to Yara. Yara uses this as an alternative feedstock for the production of ammonia, allowing it to reduce its CO2 emissions. Although the export of hydrogen increases CO2 emissions at Dow, the exchange provides a net CO2 reduction for the region.

Comments on the graph below
•    Data corrected for full acquisition of ELSTA in 2018.
•    Roadmap emissions 2026 – 2050 for illustrative purposes
•    Dow reports for other companies operating on its site; these emissions have been excluded in the above graph 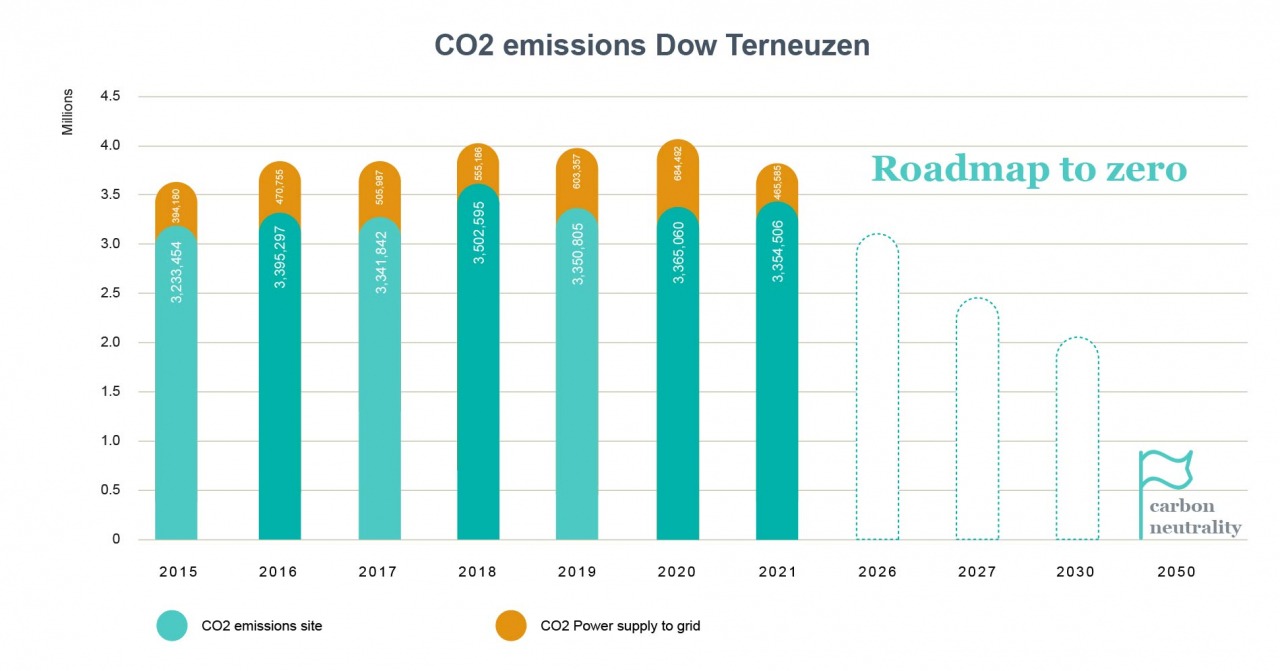